Campers (Ages 7-17) will learn how to write, play and record original music that they will not only play at the end of camp performance, but be able to take home a recorded version of their song!

Campers ( Ages 7-17) will learn and perform rock songs starting from the 50’s and go through every decade until today!

Campers (Ages 7-17) will be taking a collection of the most popular radio pop, hip hop, and R&B songs and making them into rock songs!

For this Summer Intensive, campers (Ages 13-19) will be fully immersed into the life of a professional performing musician. This will be an off site camp at a staged venue (in Mountain Lakes) for the full two weeks where the campers will not only be choosing and writing their own songs, but will be learning all of the aspects about playing and performing as a professional musician. This will also include learning about set up for every instrument and their equipment at a live show, basic live sound engineering, and basic lighting that is essential for a live concert. Campers will not only get one on one sessions to master their instruments with the band, but they will also have access to an array of special guest directors from professional bands, producers, and music industry workers to give real time insight into the music industry. 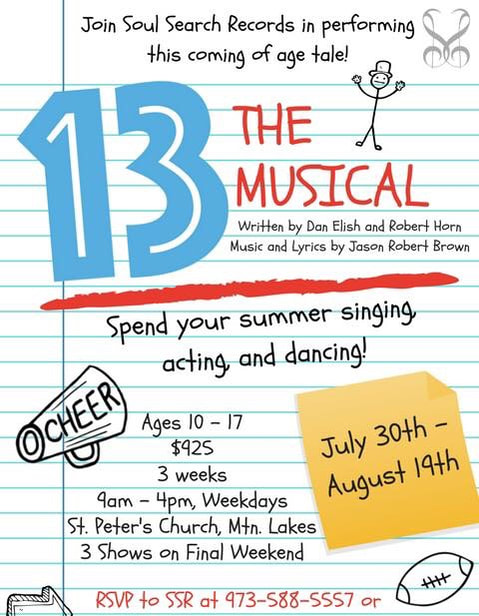 About 13 The Musical
Geek. Poser. Jock. Beauty Queen. Wannabe. These are the labels that can last a lifetime. With an unforgettable rock score from Tony Award-winning composer, Jason Robert Brown, (Parade, The Last Five Years, Bridges of Madison County) 13 is a musical about fitting in – and standing out!
Evan Goldman is plucked from his fast-paced, preteen New York City life and plopped into a sleepy Indiana town following his parents divorce. Surrounded by an array of simpleminded middle school students, he needs to establish his place in the popularity pecking order. Can he situate himself on a comfortable link of the food chain... or will he dangle at the end with the outcasts?!?
Soul Search Records is excite to showcase all the talented young artists looking for a summer program in Boonton, Boonton Township, Denville, Morris Plains, Morristown, Mountain Lakes, Parsippany and Randolph. In the Broadway production, even the band was made up of teens, which is a fantastic way to involve a diverse group of artists. The cast is comprised entirely of teenagers, but the stories that come to life here are ageless, the emotions they explore timeless, the laughter and the memories they provide priceless.
The Basics
Sing, dance, and act with us! From audition to curtain call and everything in-between, this intense program gives us three weeks to cast, costume, choreograph, and construct a full production.
13 The Musical
Music and Lyrics by Jason Robert Brown
Written by Dan Elish and Robert Horn
Program Details
As shown in the flyer, the program's rehearsals and performances will be held at St. Peter's Episcopal Church in the beautiful town of Mountain Lakes. (Located less than a mile from Soul Search Records)
Dates: July 30 - August 19
Hours: M-F, 9am-4pm, and be available all day August 18-19
Performances: August 18 at 8pm, August 19 at 3pm and 7:30pm*
Ages: 10-17
Price: $925 (Pay in full now or make a non-refundable deposit of $175 to reserve your spot. Pay in full by July 1)
BREAKS DOWN TO $7.50/hour!

Day 1 of our Summer Music Theatre Program: Today the campers participated in a bunch of ice breakers and acting games! They were given material to perform for the auditions tomorrow, including songs, acting sides, and a dance combo. They also got to learn a little bit about how to have a successful professional musical theatre audition. We ended the day with a Horah to help get into the mood of the show! Thanks to all for a great, fun first day! Can’t wait to see everyone again tomorrow! 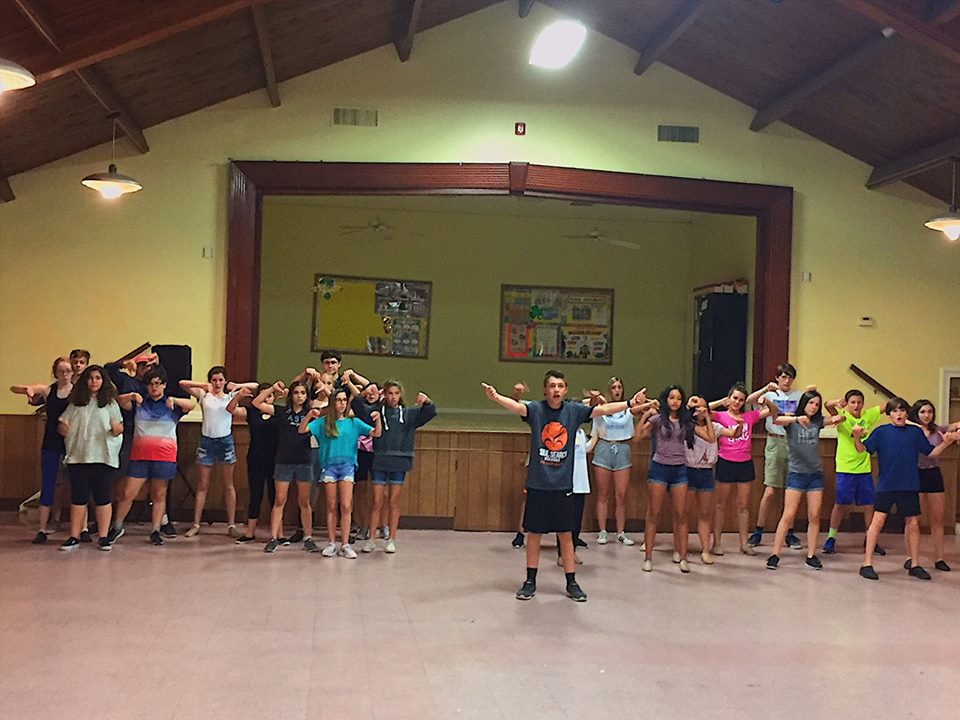 Day 3 of our summer music theatre program: Today, the campers received their roles in the show and started off the day with a read through. They then learned music and choreography for the opening number “13!” They finished off the day with a class in musical theater history.

Day 4 of our summer music theatre program: The campers began their day with a class in tap dance. They then continued to work on music and choreography. We finished off the day with staging two scenes and a class about “creating your character.” We can’t wait to continue working with this wonderfully talented cast!

Twelve-year-old New Yorker, Evan Goldman, is surrounded by rabbis. After chanting, one of them explains that, when a boy has his Bar Mitzvah, he becomes an adult. Evan breaks from the scene and expresses his anguish to the audience. The mounting pressure of puberty, coupled with his parent's ugly divorce, has created unneeded stress in his life ("Thirteen / Becoming a Man"). Just as Evan begins to feel hopeful, his mother calls to tell him that they're moving to Indiana. Once there, however, Evan finds a friend in his neighbor, Patrice. Evan is disappointed that there aren't any cool places in Indiana to have his Bar Mitzvah; Patrice attempts to encourage him ("The Lamest Place in the World").
Next, we join Evan for the start of the school year. Brett, the most popular kid in school, has summoned up the courage to ask Kendra, the prettiest girl in school, to a scary movie on Friday night so that he can kiss her ("Hey, Kendra"). Despite her best friend, Lucy's, attempts to dissuade her, Kendra consents. Inviting Kendra to a scary movie was Evan's idea, so Brett decides that Evan is cool and refers to him as the "Brain." As the new kid, Evan is thrilled. Patrice, however, is not amused. As the popular kids begin considering Evan's invite to his Bar Mitzvah, however, he becomes pressured to renege his invitation to Patrice – no one will attend if she is there. Seeing the group is not bluffing, he hastily rips up her invitation. Patrice is devastated.
Later that day, we meet Archie, a high school student who suffers from a degenerative illness. He has run into Evan in the school and expresses anger at Evan for humiliating Patrice, his best and only friend. In an attempt to capitalize on the incident, Archie promises to help mend things between him and Patrice, but only if Evan can get him a date with Kendra ("Get Me What I Need"). At cheerleading practice, Kendra teaches a new cheer while Lucy resolves to make Brett her boyfriend ("Opportunity").
Elsewhere, Archie tries to talk Patrice into giving Evan a second chance, especially since she has a crush on him. Patrice feels betrayed by Evan and finds it difficult to forgive him ("What It Means to Be a Friend").
In class, Brett tells Evan that he should get his mom to buy them all tickets to the new thriller, "The Bloodmaster." Evan protests that his mother won't buy them tickets to an R-rated movie, but Brett reminds him that, if she doesn't, nobody will go to his Bar Mitzvah. Evan cycles through possible plans, eventually settling on having Archie use his illness to guilt his mother into relenting ("All Hail the Brain / Terminal Illness"). In an effort to make things better with Patrice, Evan eventually asks her to go to the movie with him as his date. He doesn't realize until later on that he has set up Archie's date with Kendra on the same day and movie as Brett's date! Realizing his mistake, Evan makes Archie promise not to do anything more than sit next to Kendra during the movie, or else he will screw up Brett's date. Archie agrees, and everyone prepares for Friday night ("Getting Ready").
At the movie, Patrice is upset that Evan isn't even sitting next to her. Throughout the bloody scenes, we see into Brett and Kendra's thoughts as they prepare for the impending kiss ("Any Minute"). Just as they're about to lock lips, Archie ruins it. Brett swears revenge on Evan and Archie. Lucy, seeing her chance, kisses Brett. Patrice tells off Evan when she sees that all he cares about is Brett being angry at him ("Good Enough"). With no one to whom he can turn, Evan realizes that he's in danger of forever being a lonely geek ("Being a Geek").
As Lucy and Brett begin dating, she forces him to spend more and more time with her. Brett's friends recognize that Lucy isn't good for Brett... or for them at all ("Bad Bad News"). Evan promises to try to bring Brett and Kendra back together so that he can get on everyone's good side. Archie, fearing that this is an impossible mission, begs Patrice to help Evan. She shows up just in time to tell Brett to talk to Kendra, and she and Evan suggest things to say – while resolving their own issues ("Tell Her").
Brett takes their advice and mends his relationship with Kendra. Lucy, however, won't stand for this. She spreads a rumor that Kendra is cheating on Brett with Evan, and then gets Evan and Kendra in the same place so Brett can catch them ("It Can't Be True"). As Kendra runs after Brett, Evan realizes that he didn't really want to be friends with Brett anyway and that Archie and Patrice are his true friends. He wants to call off the Bar Mitzvah because it would only be the three of them, but Archie and Patrice insist that it won't be that bad ("If That's What It Is"). Finally, Evan has his Bar Mitzvah, and it turns out to be a success. Reflecting on the lessons of becoming a man, he begins to accept what growing up is all about ("A Little More Homework"). The show ends with the cast in celebration ("Brand New You"). 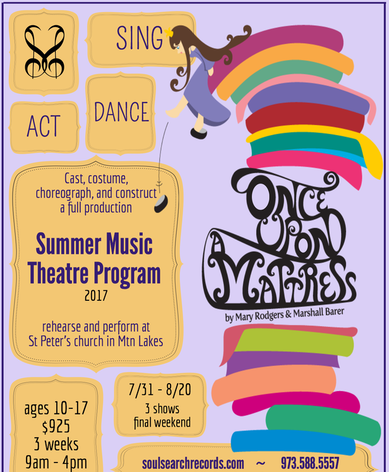 The basics
Sing, dance, and act with us! From audition to curtain call and everything in-between, this intense program gives us three weeks to cast, costume, choreograph, and construct a full production.
Once Upon a Mattress
Music by Mary Rodgers
Book by Jay Thompson, Dean Fuller and Marshall Barer
Lyrics by Marshall Barer

About Once Upon a Mattress
If you thought you knew the story of 'The Princess and The Pea,' you may be in for a walloping surprise!
Did you know, for instance, that Princess Winnifred actually swam the moat to reach Prince Dauntless the Drab? Or that it may not have been the pea at all that caused the princess a sleepless night?
Carried on a wave of beguiling songs, by turns hilarious and raucous, romantic and melodic, this rollicking spin on the familiar classic of royal courtship and comeuppance provides for some side-splitting shenanigans.
Chances are, you'll never look at fairy tales quite the same way again.